On Thursday, July 12th, Wyatt was admitted to the hospital for a scheduled stoma reconstruction surgery to remove the access skin growth around his stoma site and to close off the additional stoma opening. Now post-op and sedated in the PICU, we are glad we had the surgery done now rather than later. It turned out that right under his vocal cords there was scar tissue that had grown from the inside and up his airway. That scar tissue had gotten so big that it was blocking any air from going through around his trach. Aside from the obvious concerns that this blockage could have caused a sudden serious issue with trach changes one day and ventilation by mouth may not be possible, this find explains why Wyatt used to be able to vocalize much better several months ago and lost his ability to breathe through his mouth and nose almost completely. We assumed it was due to his trach upsize, meaning a wider trach would leave less room for air to pass by his trach through his vocal cords and out his mouth and nose. While this unfortunately means that the surgery ended up being a completely stoma reconstruction and therefore has to be treated like a new tracheotomy in regard to recovery, finding and removing this blockage opens up the possibility again of better vocalization and therefore, less frustration and possibly even less blue spells for Wyatt. I’m not betting money on the last part but simply hearing him snore when he’s sleeping now brings tears to my eyes. Snoring means he can make noise. I’d give anything to hear him laugh or even cry and I will break all parenting rules and let him curse on occasion if he will just learn to talk.
Looking down his airway during surgery, this is what they found... Don't worry, I covered up the gross pictures of the actual reconstruction portion of the surgery. 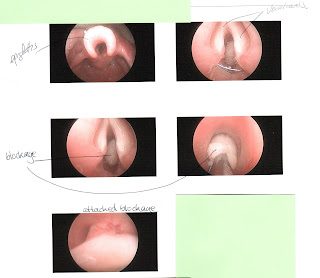 my hero
This blog is intended for special needs families. It is my hope that by telling our story that other families can find the courage to move forward and the strength to meet life head on, no matter what the challenges... This is Wyatt's story of living with CCHS. http://www.nicoleott.expert/ Join my Facebook Group "Communication WITHOUT Boundaries" for Stress Management and ASL vocabulary support: https://www.facebook.com/groups/493268000865577/